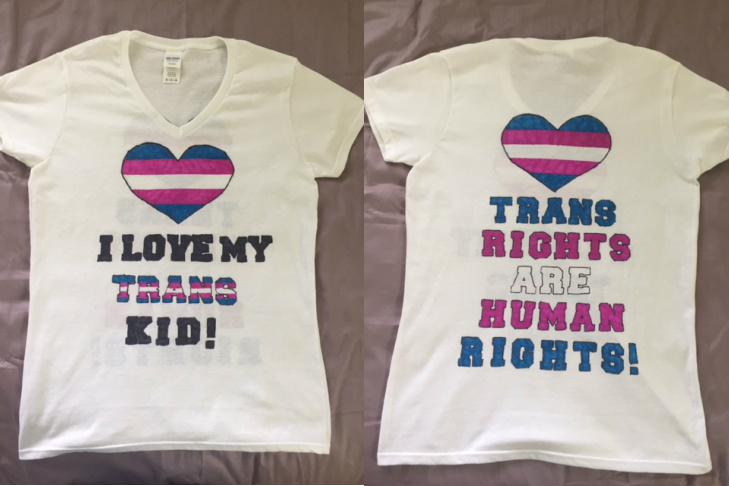 Today I walked down Fifth Avenue in the NYC Pride March. Today I wore a t-shirt for everyone to see. “I Love My Trans Kid!” “Trans Rights are Human Rights!”  I  wore it on the train station platform. I was aware of what it said as I sat in the train car, as I walked the city streets to the parade, as I marched and greeted onlookers, and as I returned home at the end of the day.

My youngest daughter said to me when I first showed her how I had decorated the shirt, “Will you change into it when you get to parade?” I let her know that “No, I will wear the shirt on the train.” She wondered, “Will you be safe?” This has been the same fear I’ve had for my transgender daughter since she came out four years ago. Thankfully, living where we live, I knew I’d be safe today. But would I feel awkward sharing something so personal and private in such a public way, with every stranger who sees me? Maybe. I wasn’t sure.  But this day of Pride gave me the strength to do it anyway.

If thousands of LGBTQ+ people can publicly come together to say, “This is who we are and we are not ashamed!” then I can do my little bit to support them. And yes, at first I did feel a little awkward standing at 8:30 am waiting for the train, but then I owned it and Pride overcame me. I straightened my shirt so that everyone could read the letters, if they chose to,  and I stood confidently. I’m pretty sure no one cared what shirt I was wearing.

I find it inspirational that the word Pride has been claimed by the LGBTQ+ community. I look around at every person proudly claiming their identity and sexuality publicly, and I rejoice for each of them. For I imagine that almost every single one of these individuals had a struggle when they first realized who they were attracted to or how their gender identity differed from others. I imagine that Pride was the last emotion they initially experienced. And they have taken this secret, this extreme vulnerability, something that may have caused them anguish, confusion, persecution, and a whole host of other emotions and experiences, and owned it. This is not the Vulnerability March. This is not the Shame March, and this is not the Don’t Ask Don’t Tell March. This is the Pride March! I applaud every brave soul who marched, who watched, who cheered, and who supported.

I’ve been thinking of the word Pride this week and I realize that for me, the  most powerful connotation is the Lion Pride. The family. The group. The community. I wasn’t sure that I would march this year, since my daughter wasn’t around, and I typically do these things with her. But then my sister told me that she and her family were marching. Hey, that’s my Pride! And I started getting invitations from various groups I affiliate with. And I realized that my Pride was here and this is where I belong.

This is a Pride where people take care of each other. Marching in front of me were LGBTQ+ Orthodox Jews with big signs letting people know that “You Are Not Alone.” Many groups, including that one, handed out cards to other marchers, and people lining the streets, giving contact information for support.

The throngs of people who lined every single street along the way, cheering our LGBTQ+ community, were comprised of the most diverse group of people I’ve had the pleasure to encounter. Old, young, different religions, different political leanings (although it did seem to lean from left to extreme left), ethnicities, languages, gender identities, sexual orientations, and various stages of dress and undress.  They waved, shook hands, gave high fives, put thumbs up, whooped, hollered, and hung out of windows, clapping. I actually got pretty emotional. This was affirming for anyone who was still feeling vulnerable about publicly showing up as their authentic selves. They were being celebrated. A mom marching in her first parade with her transchild shared with me that today was the happiest she’s seen that teenager.

My friend’s son said to her last year at his first Pride parade, that he imagined this was how a persecuted Jew feels, who arrives in Israel for the first time. A transgender teen I know told her work that she needed the day off today because this was a national holiday for her people. Her People. She didn’t always think she would have a group of people to call Her People. I am so grateful to the Pride.

I think back to all of the things I have hidden from others, and felt vulnerable about. I think back to how I first felt when I learned my daughter was transgender. Did I feel proud initially? No. I was nervous. I feared the unknown. I thought I’d be judged. I used to walk with my head down when we walked together in public spaces, my face burning with embarrassment. I was scared to look at people’s expressions for fear of what I’d see or walk too closely to hear what they said to their friends about us. I didn’t understand enough yet. I was too wrapped up in what others might think to be comfortable supporting my child’s journey confidently.

That feeling has definitely evolved. The Mama Bear in me comes out more ferociously around the protection and fight against ignorance about LGBTQ+ issues than almost anything else. I truly think to myself, “Let someone just try to say something ignorant. My hair will rise, my claws will come out and I will ROAR!”  I feel confident now  and know that I am defending basic human rights. Now I hold my head high, looking everyone in the eyes as I walk with my daughter. Because I am so very naturally and simply Proud of her.

I will admit that I do wish that we could take our cue from these annual days of Pride and have opportunities to wear other insecurities and vulnerabilities on our t-shirts. Of course being LGBTQ+ is very different from having a mental health issue, struggling with addictions, and having chronic illnesses. It’s not an illness at all. But I think a lot of us would benefit from experiencing the support of our Prides around those other issues, as well. To state publicly what we are feeling insecure about. To share what we think is a terrible secret, only to learn that most other people have experience with this also, and are here to support and applaud one another. “You are not alone!” How relieving would that feel?

Today, thousands of people wore their vulnerabilites inside out and were proud. What an unbelievable experience. My wish is that this comfort level with being who we are continues past the Pride marches.